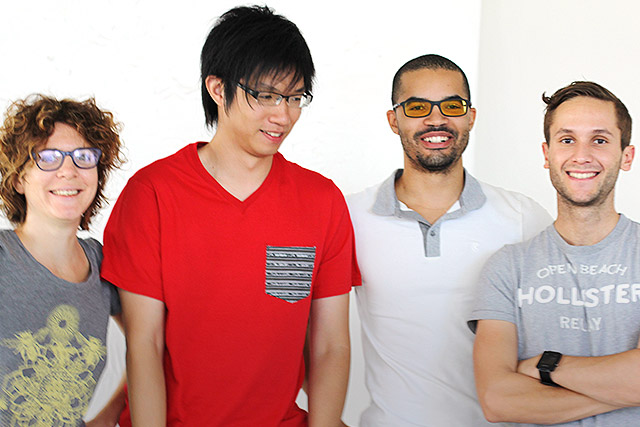 Boris was born in Johannesburg, South Africa, before growing up in Hannover, Germany, where he founded his own company and spent fifteen years working in the publishing and advertising industries as a software architect for newspapers, magazines, and directories, with the goal of bringing lean structures to print production processes.

Six years ago, he relocated his family to the coast of Southern California, and now considers himself a global citizen. His passion for technology, visual arts, simplistic design, and interaction concepts have continued to inform his mission to streamline technical processes and methodologies. When he isn’t focused on bringing rich content to tiny screens on mobile devices, you can find him enjoying his Pacific Ocean view with his artist wife and daughter from their home in Laguna Beach.

Jeff grew up in the Midwest and spent many a summers in the boatyards with his dad repairing boat engines, scrubbing the decks, and working on cars in his family’s home garage. Jeff moved onto the automotive industry after college, starting out under Program Management for Jeep/Dodge Truck Engineering. He then went on to serve as a launch supervisor for Grand Cherokee, Viper, and Dodge Truck. After a successful automotive career which included a Wards Automotive Award with the Grand Cherokee Team (Best Sport Utility Vehicle in Class) Jeff said goodbye to Motor City and hello to The Golden State. He studied multimedia for one year at the Academy of Art San Francisco where his passion for startups and big ideas had room to flourish. He followed that passion to Los Angeles, and the rest is history.

When Jeff is not project managing his development team, you can find this former gymnastics instructor working out at the gym, dreaming of being knighted by Daenerys Taergarian. And when he’s not working out or at the office, he’s on the lookout to expand his extensive classic vinyl record and Air Jordan collection.

Patricio Fuentes has over two decades of marketing experience targeted at youth and family industries. His skills range from strategy, packaging, branding, licensing, and consumer research.